The latest entry in our “Meet the Team” series focuses on Tom Anderson, whose relationship with Loop is about more than just business. 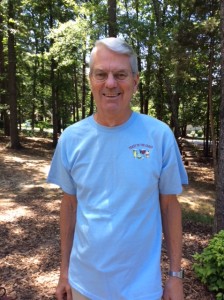 Tom has worked with Loop Communications since 2012.

Started working at Loop: 2012, when he moved from the Pittsburgh area following his retirement.

Family: Tom has been married to Debbie for more than 20 years. His daughter, Christine, is married to Loop founder/CEO Brian Tolleson.

Pets: A 16-year-old cat named Noel, who showed up injured on Tom and Debbie’s doorstep just before Christmas one year.

What was your first job?

I was a stockboy in a grocery store. I also delivered groceries on weekends, back when people used to call in orders.

What impresses you about this business?

They’re always looking at ways to grow, but it’s not out-of-control growth – they do it the right way. Loop is also very customer-oriented.

Can you describe your career?

I started at Universal Rundle Corporation, which made plumbing products. I later got transferred to Texas, where I started (and stayed) in an area that produced fiberglass bath and shower fixtures. I was the office manager, handling things including accounting, purchasing and personnel.

Then I went back to Pennsylvania, where I became a supervisor and later a plant manager. I managed plants there, then in Massachusetts, then in Pennsylvania again. I also worked in product control, as a product manager, and as a marketing manager.

Which role was your favorite?

As a product manager, I enjoyed the travel and training.

What do you spend most of your time doing now?

We spend a lot of time with our grandchildren, running them back and forth to school. Sometimes, I look back at my career and wonder how I had time to work – it’s busy!

What is your favorite place to vacation?

Ocean City, Md. The first time we went there was 1984, and we’ve been there just about every year since.

Place you most want to visit?

Key West. I’ve traveled a lot, visiting 40 states and places like Taiwan and Mexico. Now, I’d like to see more places in the U.S., and Key West is the one I’d most like to visit.

When I was a kid, neighbors on both sides of us liked to work on cars in their garages, and I spent time around that for as far back as I can remember. I have a 1966 Pontiac GTO in my garage now, but plan to sell it in exchange for something that is already done. The work is more than I can do myself.

Teleportation. I’d like to be able to get somewhere far away without having to spend so much time driving.

Who would play you in the Loop movie?

When Christine was young, we visited Universal Studios. The staff was picking people to be on stage as part of the show, and she badly wanted to be picked. One woman chose me to play Jimmy Stewart being interviewed on The Tonight Show, so I’ll have to go with him.

If you could have dinner with three people from history – living or dead – who would they be?

I don’t know about any specific people, but I’d like to sit with some of the founders of our country and see what they think about everything that’s going on today.