Our customers get to talk to our team members on the phone, but the work of making sure your Loop business phone system works perfectly sometimes prevents us all from getting to know each other. So, we’ve decided to share more about our dedicated staff with a “Meet the Team” series. Our next team member is Brandon Proffitt. 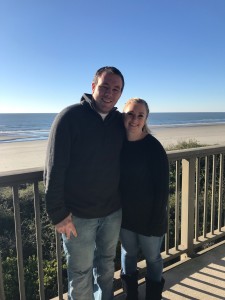 Brandon and Sarah at Kiawah Island.

Other jobs of note: I was a technical recruiter, but it wasn’t my thing. I wanted to fix things, not find other people to do it. Even as a kid, I upgraded computers to play video games.

(Note: Southern-born Brandon became a hockey fan after meeting Buffalo native Sarah while playing in a soccer league, but he never warmed up to her hometown Sabres. Instead, he prefers the New York Rangers.)

What do you do all day?

I handle incoming tickets, check on phone system setups, and check servers. I also handle most of the buildouts for new customers.

The rapport with Brian, James and Amanda. It’s professional but laid back – a good work environment. Working from home is nice, but if I was stuck in an office with them all day, it would be a great place to work.

It’s a man cave turned office, in our bonus room above the garage. There are posters of the Gorillaz, Nirvana and the Who, and I usually have the TV or music on for background. On busier days, the TV is off.

I’m a huge fan of Imagine Dragons, and also listen to alternative rock, electronic dance music and trance music. While working, words can be distracting.

I think I empathize well with customers. I understand how hard things can be when things don’t work, and try to get them handled quickly. My job is 90 percent making sure the customer understands what’s wrong, and how we can prevent the same issues in the future.

What are your favorite places to go?

I’m a huge naval history buff – especially World War II-era ships. Patriots Point in Charleston has an aircraft carrier, a destroyer and a submarine. Oh, and Lake Tahoe is probably my favorite place on the planet.

Place you most want to visit?

What is your favorite movie?

What is your favorite TV show?

Currently, The Expanse (on Syfy).

Computer gaming. I like Destiny 2 and PlayerUnknown’s Battlegrounds, but play lots of other games.

Is it weird that I’m fine with being normal? I guess flying, though that would mean more if I had a commute. How about the ability to keep the temperature of a beer at exactly 33 degrees?